Clorox has claimed to be a company trying to go green. As with any company, there is a lot of healthy skepticism about this desire. Below are some of the initiatives or events that relate to their claim to "go green".

In November 2007, Clorox bought Burt's Bees for $913M. Burt’s Bees was small home-grown and independently owned company that created beeswax lip balm and other personal products such as lotions, soaps and shampoos from natural products. The president of Burt's Bees, John Replogle reportedly told critics “Don’t judge Clorox as much by where they’ve been as much as where they intend to go,” and it was reported in the NY Times that he will make a blog post on the Burt’s Bees site in six months (May 2008) stating his opinion on Clorox's progress on their green initiatives. 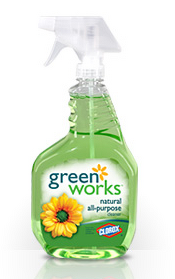 In March 2008, Clorox launched a new link of cleaming products called Green Works Natural Home Cleaning Products. The products claim to be produced with biodegradable coconut-based surfactants, citric acid, lactic acid and corn-based ethanol (alcohol). With 99 percent natural, sustainable and biodegradable ingredients, Green Works has the highest percentage of natural ingredients in cleaning products currently on the market, according to their press materials. They are still using un-natural colorants and fragrances but have stated that their intent is for those to be natural too in time.

The products are endorsed by the Sierra Club by placing their logo on the label. The Sierra Club approved the use of their logo as part of the Green Works brand after it asked several of its volunteer committees to review the cleaners; it's the first time the non-profit has given its blessing to a household cleaning product.

The product line contains general purpose cleaner, window cleaner, toilet bowl cleaner, dilutable cleaner and bathroom cleaner. Clorox claims that each one of the five cleaners is at least 99% natural.

Consumers should be aware that, although ethanol SDA-3C (denatured alcohol) is considered biodegradable, it is also very toxic to humans. The process of denaturing alcohol, as required by law, involved irrevocably poisoning the alcohol so that it cannot be converted into drinkable alcohol. The Honeywell Material Safety Data Sheet states that ethanol SDA-3C may be fatal if inhaled, can cause adverse reproductive effects, and can harm to unborn children. Pregnant women should especially avoid exposure.

Their are concerns still while incredients derived form coconut oil and corn oil (ethanol and glycerine) are are better than using petroleum-derived alternatives, there are still major issues with rainforest habitat destruction relating to harvesting coconut oil and all sorts of issues with corn-based ethanol.