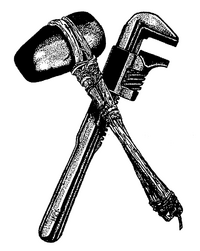 Earth First! is a radical environmental advocacy group that emerged in the Southwestern United States in 1979.

Provoked by what they considered a sell-out by mainstream environmental advocates during the "RARE II" (the Forest Service's Roadless Area and Review Evaluation) meetings, the activists envisioned a revolutionary movement to set aside multi-million acre ecological preserves all across the United States. "Suddenly Foreman called out 'Earth First!' The next thing you know," Wolke says, "Roselle drew a clenched fist logo, passed it up to the front of the van, and there was Earth First!" Slightly The Snake

During the group's early years (1979-1986), Earth First! mixed publicity stunts (such as rolling a plastic "crack" down Glen Canyon Dam) with far-reaching Wilderness proposals that reportedly went beyond what mainstream environmental groups were willing to advocate (with Conservation biology research from a biocentric perspective). The group's proposals were published in a periodical, Earth First! The Radical Environmental Journal, informally known as the Earth First! Journal. Edward Abbey often spoke at early gatherings, and his writings were an inspiration that led him to be revered by the early movement. An annual gathering of the group was known as the Round River Rendezvous, with the name taken from an Ojibwa myth about a continuous river of life flowing into and out of itself and sustaining all relations. The rendezvous is part celebration with art and music, part activist conference with workshops and accounts of past actions.

In the spring of 1985, a nationwide call to action in the Earth First! Journal brought Earth First! members from around the United States to the Willamette National Forest of western Oregon, to take action against Willamette Industries, a logging company. Finding logging road blockades (carried out by Corvallis-based Cathedral Forest Action Group) were offering too short-term a protection, Marylander Ron Huber and Washingtonian Mike Jakubal devised Tree sitting as a more effective Civil disobedience alternative.

On May 23, 1985 Mike Jakubal made the first Earth First! tree sit. When U.S. Forest Service Law enforcement official Steve Slagowski arrived, Mike Roselle, Ron Huber and others were arrested sitting at the base of the tree in support. This first tree sit lasted less than a day—Jakubal came down in the evening to look over the remains of the forest that had been cut down around him that day, and was arrested by a hidden Forest Service officer—but the tree-sitting concept was deemed sound by Earth First! members. Huber and Jakubal, in the company of Mike Roselle, brought the concept to the June 14th Washington EF Rendezvous; on June 23, a convoy of activists arrived at Willamette National Forest, and set up tree platforms in a location "Squaw/Three timbersale" the group thought was threatened with imminent destruction. While at one point, up to a dozen trees were occupied, a July 10 clash took down all the trees with platforms except for Ron Huber's as the other sitters had gone for an overnight meeting elsewhere. Huber remained in his tree, dubbed Yggdrasil, until July 20 when two Linn County Sheriff's deputies were lifted in a crane box and wrestled him from the tree.

Later, from about 1987 on, Earth First! became primarily associated with Direct action to prevent Logging, building of Dams, and other forms of Subdivision (land) which Earth First! finds may cause destruction of Wildlife Habitat (ecology) or the despoilation of wild places. This change in direction attracted many new members to Earth First!, some of whom came from a Leftist or Anarchist political background or involvement in the Counterculture. Dave Foreman has related that this led to the introduction of such activities as a "Puke-in" at a shopping mall, a Flag burning, heckling of Edward Abbey at a 1987 Earth First rendezvous, and back-and-forth debates in the Earth First! Journal on such topics as anarchism, with which Foreman and others did not wish to be associated. Most of the group's older members, including Dave Foreman, Howie Wolke, Bart Koehler, Christopher Manes, George Wuerthner, and Earth First! Journal editor John Davis became increasingly uncomfortable with this new direction. This change reportedly severed their ties to Earth First! in 1990. Many of them went on to launch a new magazine, Wild Earth, and a new environmental group, The Wildlands Project. Roselle, on the other hand, along with activists such as Judi Bari, welcomed the new direct-action and leftist direction of Earth First!.

Starting in the mid-1980s, Earth First! began an increasing promotion of and identification with "Deep Ecology," a philosophy put forward by Arne Næss, Bill Devall, and George Sessions, which holds that all forms of Life on Earth have equal value in and of themselves, without regard for their utility to Human beings. Earth First followers use this philosophy to justify an Ecocentric view of the world in which intrinsic values for organisms and Ecosystems outweigh their resource values.

Since 1990, action within the Earth First! movement has become increasingly influenced by Anarchist Political philosophy. The change also brought a rotation of the primary media organ in differing regions, an aversion to organized leadership or administrative structure, and a new trend of identifying Earth First! as a mainstream movement rather than an organization. In 1992, Earth First! push as a mainstream movement caused members who refused to abandon criminal acts to start a militant offshoot called Earth Liberation Front. Most members of Earth First! liken themselves to a decentralized, locally informed activism based on communitarian ethics while Earth First adversaries characterize the group as conducting a form of terrorism.

In various parts of the country, individual citizens and small groups form the nuclei for grassroots political actions, which may take the form of legal actions--i.e. Protests, timber sale appeals, and educational campaigns--or Civil disobedience--Tree sitting, Road Blockades, and Sabotage - called "Ecotage" by some Earth First! members, claiming it is done as a form of Ecodefense. Often, disruptive direct action is used primarily as a stalling tactic in an attempt to prevent possible environmental destruction while Earth First! Lawsuits try to secure long-term victories. Reported tactics include road blockades, activists locking themselves to heavy equipment, tree-sitting, and sabotage of machinery.

Earth First! was known for providing information in the Earth First! Journal on the practice of Tree-spiking and Monkeywrenching (or ecotage) which have led to reports of injuries from such tactics, although no evidence that Earth First! was involved in related activity. In 1990, however, Judi Bari led Earth First! in the Northern California and Southern Oregon region to renounce these practices, calling them counterproductive to an effort to form a coalition with workers and small logging businesses to defeat large-scale corporate logging in Northern California.

Some critics of the movement still call Earth First! activity Eco-terrorism, though Earth First! proponents say that the term more accurately describes the people who destroy the environment. In response to being labeled terrorists, some Earth First! members have adopted the Neologism terrist instead.

In 1990, a Bomb was placed in Judi Bari's car, shattering her pelvis and also injuring fellow activist Darryl Cherney. Police and the Federal Bureau of Investigation suspected that they were responsible for the bomb but were unable to find any evidence tying them to the explosion. Bari died in 1997 of cancer, but her federal lawsuit against the FBI and Oakland, California police resulted in a 2002 jury verdict awarding her estate and Darryl Cherney a total of $4.4 million. Eighty percent of the damages were awarded for violating their First and Fourth Amendment rights during the course of investigating the bombing.

Some theories have focused on Mike Sweeney, Bari's estranged ex-husband, who is alleged to have a history of domestic violence and political bombings dating back to the 60s. This theory has been advanced by Kate Coleman, author of The Secret Wars of Judi Bari, as well as Bruce Anderson, editor of the Anderson Valley Advertiser. This theory is dismissed by Friends of Judi Bari as part of a "right-wing funded smear" campaign. Bari's supporters believe there is evidence the FBI helped plan the bombing, although there has never been a government investigation into this claim. Special Agent Richard W. Held, who supervised the Bari case for the FBI, was dismissed from the lawsuit in early 1997 .

Earth First! in the UK

The Earth First! movement in the United Kingdom started in the 1990, when a group in Hastings Sussex organised an action at Dungeness Nuclear power station in Kent. It grew rapidly, and many groups formed, with or without the EF! name, over the next years.

The first big Earth First! actions happened in 1992 and focused around the importation of tropical hardwoods. The first major action happened in London at Tilbury Docks. The second major action, the Merseyside Dock Action, attracted between 200-600 people who occupied Liverpool docks for two days. This action coincided with the Earth First! roadshow, in which a group of UK & US Earth Firsters toured the country. Other early campaign also focused on timber-yards, most notably Timbmet yard in Oxford.

At the first national gathering in Sussex the debate focused on the use of criminal damage as a protest technique. Earth First! did not condone or condemn criminal damage, instead it focused more on Non-violent direct action techniques. Some people at the gathering coined the term Earth Liberation Front (ELF), which became a separate movement which spread back to the US. Actions involving criminal damage did happen often under cover of night and were typically done under ELF banner and attributed to Elves and Pixies, giving a distinctly British feel to the movement.

Major growth in the direct action movement started when the focus shifted to roads, and a protest camp at Twyford Down was started, against the M3 in Hampshire. Whilst Earth First! groups still played a major part, other groups such as the Dongas tribe soon formed. Along with SchNEWS the Earth First! Action Update, Do or Die and , Earth First! gathering were key means of communication between the groups. The movement grew to many other road protest camps including Newbury bypass, the A30, the M11 link road protest in London, where whole streets were "squatted." Later the focus winded to other campaigns including notably Reclaim the Streets, anti-GMO campaigns, Rising Tide, Peat Alert, Plane Stupid... The growth of this wider movement is more extensively covered in Environmental direct action in the United Kingdom. Toy Green Voice Trumpet

The UK Earth First! groups differed considerably from the U.S. groups as reported in a ten year retrospective of the Earth First! by two of the founders Jake Bowers and Jason Torrance:

Books about the early Earth First!

Other links relevant to Earth First