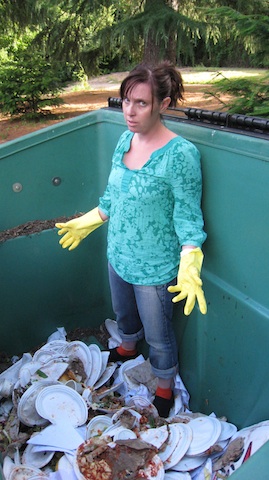 Greenlit is a 2010 documentary film directed by Miranda Bailey about the production of the indie film THE RIVER WHY as it attempts to keep an environmentally friendly set thanks to the supervision of a "green" consultant. What starts off with great enthusiasm quickly devolves in this insightful and hilarious film..

Premiering at the South by Southwest Film Festival in Austin, TX and coming out on DVD December 7, 2010, the documentary was a critical success, winning the Sir Edmond Hilary Award at the 2010 Mountain Film Festival in their Mountain/Environmental Film Competition.[4]

The idea to document this environmental effort came about when the director’s production company, Ambush Entertainment, signed on to make the film, The River Why, with some producers and financiers in Northern California who were really into making the film "green."

Since the film's release, Greenlit has been credited for raising public awareness and perking Hollywood’s ears about how much waste happens on film sets. The documentary’s creators also hope that film students and the next generation of filmmakers and crew members will change their minds about their jobs and make them more conscious about the waste we consume.