Recycling is the reprocessing of old materials into new products, with the aims of preventing the waste of potentially useful materials, reducing the consumption of fresh raw materials, reducing Energy consumed in conventional waste disposal. The overall result is a lowering of Greenhouse gases.

These materials are either brought to a collection center or picked-up from the curbside; and sorted , cleaned and reprocessed into new products bound for manufacturing.

To judge the environmental benefits of recycling, the cost of this entire process must be compared to the cost of virgin extraction. In order for recycling to be economically viable, there usually must be a steady supply of recyclates and constant demand for the reprocessed goods; both of which can be stimulated through government Legislation.

Recycling has been a common practice for most of human history, with recorded advocates as far back as Plato in 400 BC. During periods when resources were scarce, archaeological studies of ancient waste dumps show less household waste (such as ash, broken tools and pottery)—implying more waste was being recycled in the absence of new material.

In Pre-industrial times, there is evidence of scrap bronze and other metals being collected in Europe and melted down for perpetual reuse,

The United States Environmental Protection Agency (EPA) has also concluded in favor of recycling, saying that recycling efforts reduced the country's Carbon emissions by a net 49 Metric tonnes in 2005. John Tierney's extensive New York Times article, titled "Recycling is Garbage", was also highly critical of recycling, saying "the simplest and cheapest option is usually to bury garbage in an environmentally safe landfill", and claiming that "recycling may be the most wasteful activity in modern America: a waste of time and money, a waste of human and natural resources".

In order for a recycling program to work, having a large, stable supply of recyclable material is crucial. Three legislative options have been used to create such a supply: mandatory recycling collection, Container deposit legislation, and refuse bans. Mandatory collection laws set recycling targets for cities to aim for, usually in the form that a certain percentage of a material must be diverted from the city's waste stream by a target date. The city is then responsible for working to meet this target.

Governments have used their own Purchasing power to increase recycling demand through what are called "procurement policies". These policies are either "set-asides", which earmark a certain amount of spending solely towards recycled products, or "price preference" programs which provide a larger budget when recycled items are purchased. Additional regulations can target specific cases: in the US, for example, the United States Environmental Protection Agency mandates the purchase of oil, paper, tires and building insulation from recycled or re-refined sources whenever possible.

Lead-acid batteries, like those used in Automobiles, are relatively easy to recycle and many regions have legislation requiring vendors to accept used products. In the United States, the recycling rate is 90%, with new batteries containing up to 80% recycled material. Any grade of steel can be recycled to top quality new metal, with no 'downgrading' from prime to lower quality materials as steel is recycled repeatedly. 42% of crude steel produced is recycled material.

Aluminum is shredded and ground into small pieces or crushed into bales. These pieces or bales are melted in an aluminum smelter to produce molten aluminum. By this stage the recycled aluminum is indistinguishable from virgin aluminum and further processing is identical for both. This process does not produce any change in the metal, so aluminum can be recycled indefinitely. 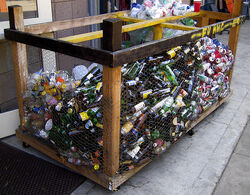 Glass bottles and jars are gathered via curbside collection schemes and bottle banks, where the glass may be sorted into color categories. The collected glass cullet is taken to a glass recycling plant where it is monitored for purity and contaminants are removed. The cullet is crushed and added to a raw material mix in a melting furnace. It is then mechanically blown or molded into new jars or bottles. Glass cullet is also used in the construction industry for aggregate and glassphalt. Glass is a road-laying material which comprises around 30% recycled glass. Glass can be recycled indefinitely as its structure does not deteriorate when reprocessed.

However, recycling glass costs more energy than producing new glass and its environmental friendliness have therefore been questioned.

Paper can be recycled by reducing it to Pulp and combing it with pulp from newly harvested wood. As the recycling process causes the paper fibres to breakdown, each time paper is recycled its quality decreases. This means that either a higher percentage of new fiber must be added, or the paper downcycled into lower quality products. Any writing or colouration of the paper must first be removed by Deinking, which also removes fillers, clays, and fiber fragments.

Almost all paper can be recycled today, but some types are harder to recycle than others. Papers coated with plastic or aluminium foil, and papers that are waxed, pasted, or gummed are usually not recycled because the process is too expensive. Gift wrap paper also cannot be recycled due to the its already low quality.

Import and export of recyclates

The value of recyclates can be seen by the fact that certain countries have begun to import the unprocessed materials. Some have complained that the ultimate fate of recyclates sold to another country is unknown and they may end up in landfill instead of reprocessed. Pieter van Beukering, an economist specializing in waste imports of People's Republic of China and India, believes however that it is unlikely that bought materials would merely be dumped in landfill. Instead, he claims that the import of recyclables allows for large-scale reprocessing, improving both the fiscal and environmental return through Economies of scale.

All recycling techniques consume energy for transportation and processing and some also use considerable amounts of water, although recycling processes seldom amount to the level of resource use associated with raw materials processing.

There may also be drawbacks with the collection methods associated with recycling. Increasing collections of separated wastes adds to vehicle movements and the production of carbon dioxide. This may be negated however by centralized facilities such as some advanced Material and Mechanical biological treatment systems for the separation of mixed wastes. It has been calculated that collecting waste and disposing it in a landfill is about $60 a ton opposed to separate collecting and taking it to be recycled costs $150 a ton.

Some recyclers prefer expanded polystyrene to be run through an EPS Densifier, which melts the foam down to take up less room. Residential recyclers can use mealworms to digest and convert styrofoam into a biodegradable excretion.

Vinyl dunnage bags were designed to be reusable. As long as there’s no contamination, the most cost-effective option is to put them back on the truck as many times as possible. Wood boards, planks and pallets can also be reused until they break. As long as they’re free from nails and staples, wood items can be ground up for mulch. The tricky part is finding a vendor that will take odd sized and damaged pallets and dunnage that is specific to your industry.

Since the creation of the Clean Air Act, companies and individuals must find an EPA compliant recycler to remove Freon and document its removal. Failure to follow the EPA guidelines and provide proper documentation can result in your company being slapped with a fine. But once you have the Freon removed, metal and other materials in these appliances can be recycled and rebates can be earned. If you’re recycling white goods in bulk, you may even be able to create a revenue stream.

Several other materials are also commonly recycled, frequently at an industrial level.

Ship breaking is one example that has associated environmental, health, and safety risks for the area where the operation takes place; balancing all these considerations is an Environmental justice problem.

Tires are also commonly recycled. Used tires can be added to Asphalt for producing road surfaces or to make Rubber mulch used on playgrounds for safety.

Much of the difficulty inherent in recycling comes from the fact that most products are not designed with recycling in mind. The concept of Sustainable design aims to solve this problem, and was first laid out in the book "Cradle to Cradle: Remaking the Way We Make Things" by Architect William McDonough and Chemist Michael Braungart. They suggest that every product (and all packaging they require) should have a complete "closed-loop" cycle mapped out for each component—a way in which every component will either return to the natural ecosystem through Biodegradation or be recycled indefinitely. 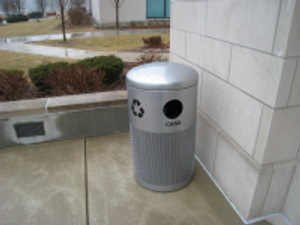 The recycling bin in Figure 1 is well-designed because it is clearly labeled and has a specialized lid that reduces the amount of trash entering the recycling stream.

The recycling bin in Figure 2, however, is poorly designed because it is not clearly labeled. And despite its novel appearance, it is not clear whether this bin is used for recycling bottles or for marketing sodas. Given this ambiguity, a person may be more likely to dispose of their used bottle in the trash bin, which directly located in front of that recycling bin.

These variations in design can dramatically affect whether a person deposits their recyclables into a recycling bin or trashcan. In a recent study, the number of bottles discarded into 30 waste bins was counted during a four-week period. To determine whether using specialized lids affected the recycling rate, 15 bins had specialized lids and 15 bins did not have specialized lids (see Figure 3 below).

Fig. 3. Bins with (and without) specialized lids 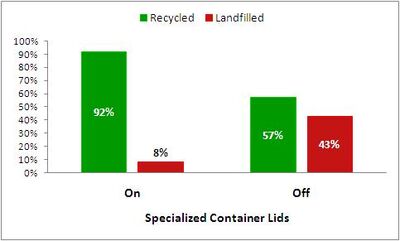 These findings reveal the importance of using sustainable designs for waste bins. Notice how the recycling rate increased by 34% when specialized lids were used. In addition, the amount of recyclables entering landfills decreased by 35%. These changes occurred despite the fact that all bins were correctly labeled at all times. In sum, recycling bins designed with the principles of sustainability offset the number recyclables entering the general waste stream, thus diverting valuable resources that may be reused and recycled back into the consumer market.